Undoubtedly one of the most important things that a travel  can give is the accumulation of experiences, feelings and knowledge. On our trip to Indonesia we wanted to know and see a unique site that some of you may have seen in some documentaries. It is the work of miners who collected rocks of sulfur in the crater of the volcano Kawah Ijen. 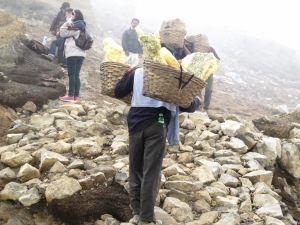 Kawah Ijen volcano is located in the region of Bayuwangi in the east of the island of Java in Indonesia. In the crater there is a lake of acid turquoise, about one km wide. Just beside the lake fumes vapor from inside the earth are channeled by pipes that condense and precipitate as liquid sulfur and the sulfur forming rocks that change color as they are cooled and subsequently charge the miners break and transport. 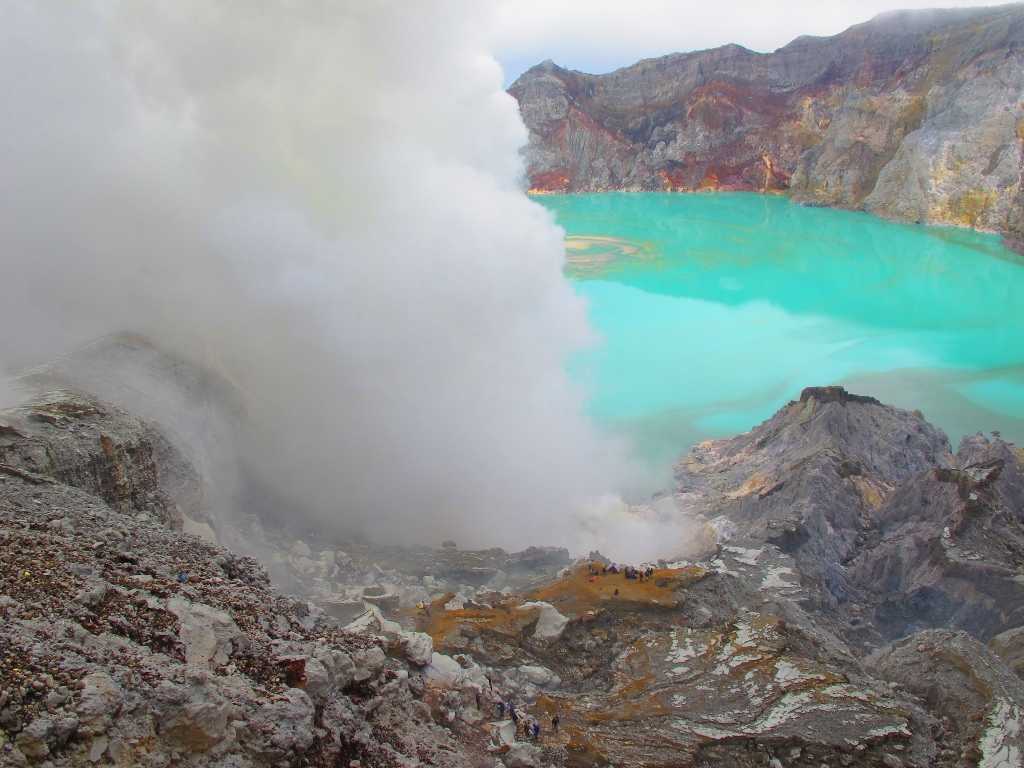 View of the lake in the crater

A visit to the volcano and the climb to the top is a must if you are traveling to Java, the views are indescribable of the turquoise lake from the summit, but the trip has other aspects more important than the purely visual. The shore of the lake is the place where there are rocks sulfur extraction by a good group of miners. 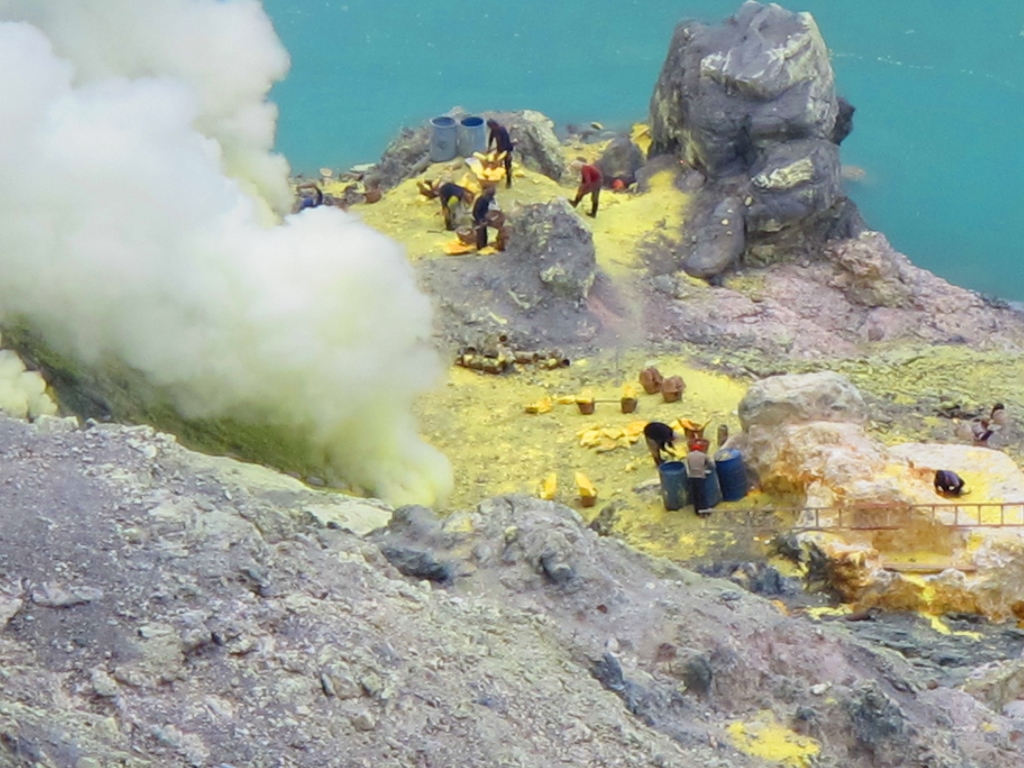 From the base of the crater lake beside the miners transport, depending on the strength of each, between 75 and 100 kgs. rock sulfur into wicker baskets that load directly above the shoulders. Once loaded with this weight go up to the summit of the volcano by a distance of 700 mts saving a drop of almost 300 mts., Once they have reached the top three kilometers downstream to download the rocks. 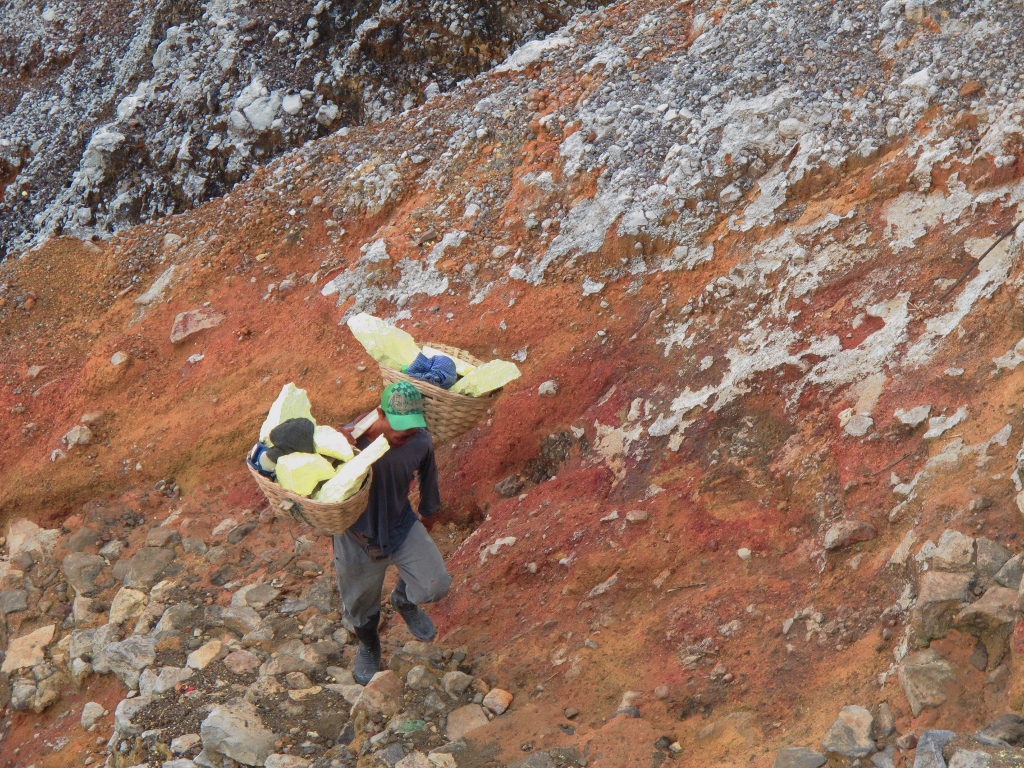 Miner arriving to the summit of the volcano

I can assure you it’s the hardest job I’ve seen with my own eyes, the suffering of seeing them climb above the boulders without hardly marked path left me a sweet-sour taste after having enjoyed views so precious.

The hardest part of the way to the summit

Badly dressed and even more poorly paid they even make a stop half way, where they call cantina, there is an item for mesuring the weigh of baskets (it’s a rudimentary system) and they get a certificate with the weight, later it could change the money earned. Each trip they earns between 60,000 and 80,000 rupees (between 4 and 6 euros) dependent kgs. transported, some miners make two trips a day. 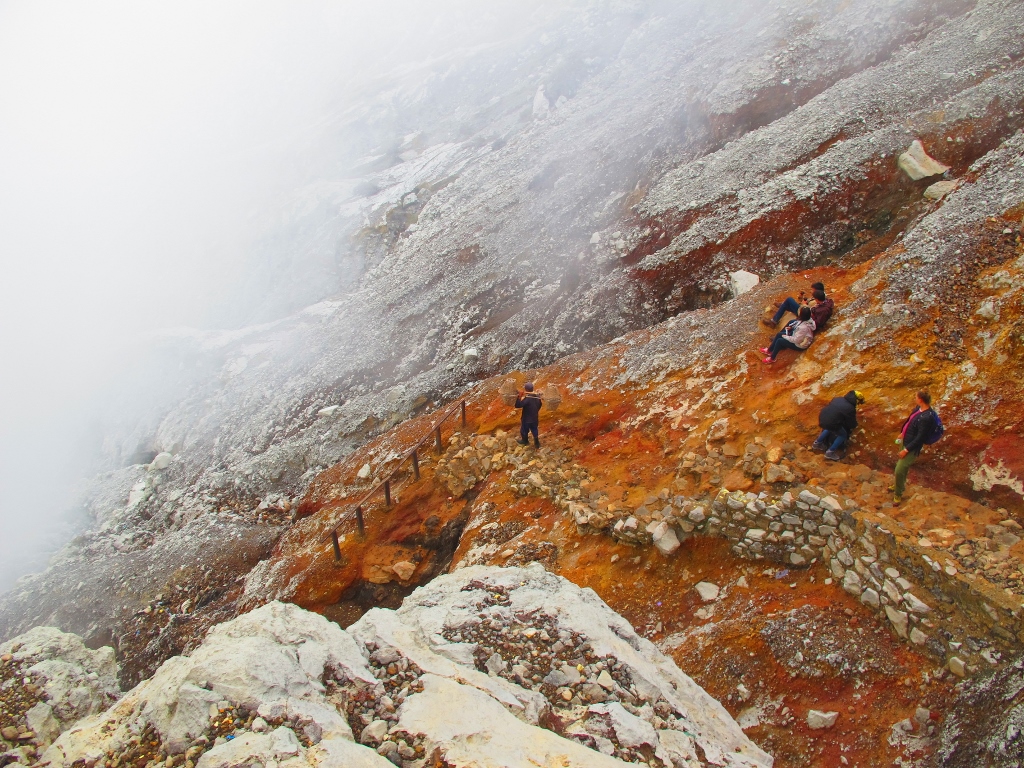 Miners working next to the shore of the lake

If the job is tough in itself, you can imagine these men working with toxic fumes and gases a part of the inclement weather (rain, stifling heat, …) according to that times of the year. The acid crater lake of Ijen volcano is known as the most acid around the world due to the amount of sulfuric acid that is concentrated.

For this trip we leave the hotel very early in our case when we had gathered agreed with our guide was 4.00 in the morning. The ride to the parking where the walk begin took approximately one hour and a half because, although the distance in kms. is not very large, state of the roads forces do it fairly slow. When we arrived in the parking the light of day began to be present, after the required warnings we start walking uphill above. From the car park to the summit of the volcano in the distance are three kms. approximately 1 hour and 45 minutes or two hours, because the rise is still considerable hard, the road presents no problem because it is good state, unless it rains in the season made impassable.

Throughout the climb we shared the road with two miners who began their working day, they were Madi and Sahari, which were counting us different stories and they were taking photographs and also showing the best lookouts. Like all the people of Indonesia that we met were both very nice and cheerful. They knew that when we got to the top and they continued their journey to the bottom of the crater we would give them a tip and we did it, because it is a very important complement of their miserable salary. 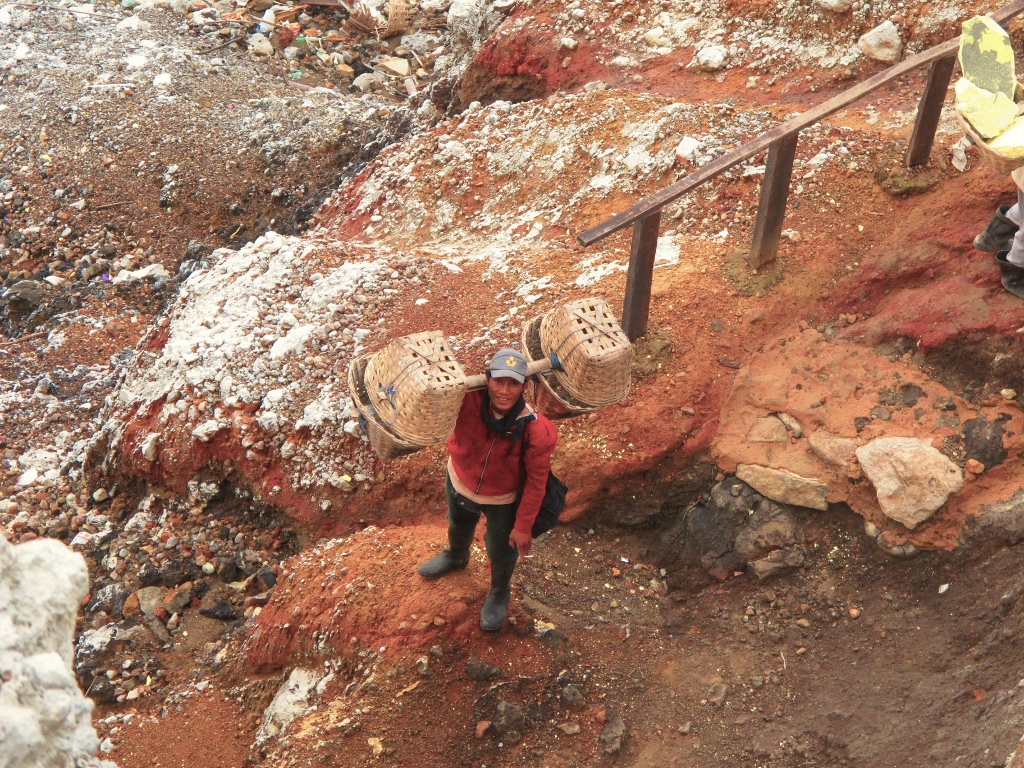 So close to 8:00 in the morning peak was watching the turquoise acid lake and the views were truly spectacular and unique, definitely one of the images that I will be forever etched in the retina. Since the top above us we dismissed two companions and follow the warnings of our guides we did not want to go down with them to the lake, we were tired and the subsequent rise seemed very hard, we were on holidays and from the top the landscape was total. 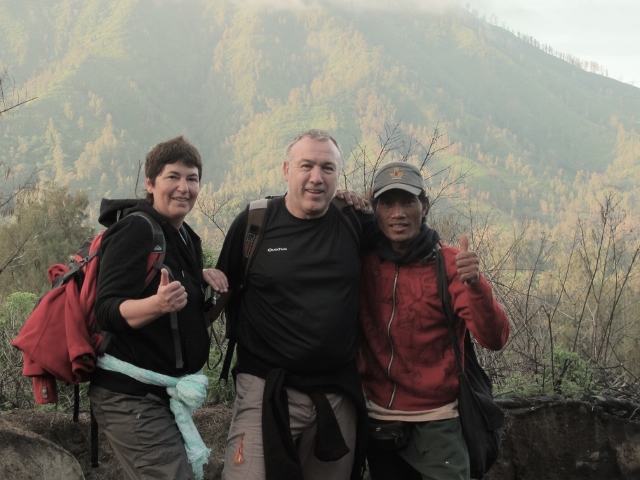 Núria and I with Madí